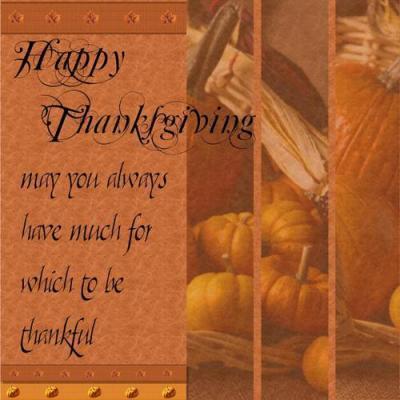 Every year Americans gather on the fourth Thursday of November to give thanks for a land of plenty and a year of blessings.

As the fall season comes to a close and a nation gathers for a celebratory meal with family and friends, the romantic within me is unleashed. For a day I can imagine a land and its people turning their faces to God—all in their own way acknowledging something larger, more expansive, than the narrow confines of daily life.

The origins of the day are well known. The first year in the new world for pilgrim settlers in New England was rough, and they gathered with Native Americans to have a meal and give thanks. Later, it became customary for nearly every U.S. president to call for an annual day of thanksgiving. The proclamations began with George Washington. But it was during Franklin Roosevelt’s second term that the fourth Thursday in November was fixed as the national day of Thanksgiving.

Today Thanksgiving remains popular as a holiday of traditional foods, family gatherings and football. This marvelous day of collective family and national bonding hints of an underlying spirituality even though secularism is making inroads into the character of the people. Ironically, the popularity of the day is in part because it is a national rather than a religious day of Thanksgiving. This is not lost on many observers.

That the day is still so popular throughout the nation is a sign of hope. There is a remnant within the land who recognize there is something more to America than just being one large consumer for the world’s goods. Materialism alone, some understand, does not satisfy the deepest human needs for meaning and purpose in life.

We are living a perfect example of God’s words through the prophet Haggai: “You have sown much, and bring in little; you eat, but do not have enough; you drink, but you are not filled with drink; you clothe yourselves, but no one is warm; and he who earns wages, earns wages to put into a bag with holes” (Haggai 1:6)

This Thanksgiving, like last, offers an opportunity to reflect that the good times may not last forever. Use this year’s Thanksgiving season to consider a new and better understanding of the God who has blessed this great land. Lift your hands and your heart in grateful thanks for what you have and ask this God to reveal Himself to you.

This site uses Akismet to reduce spam. Learn how your comment data is processed.